Skip to Main Content
U of T ENGINEERING
Posted June 5th, 2017 by Office of the Registrar 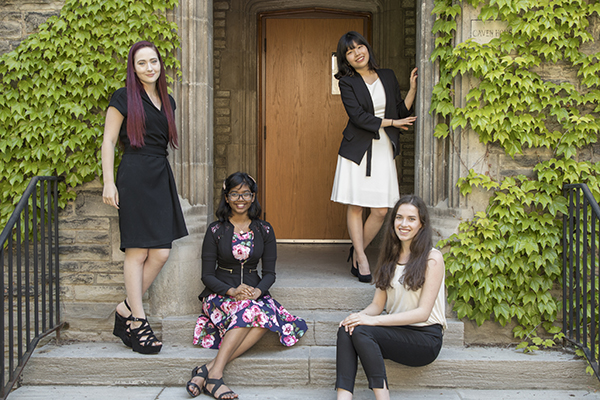 Deborah Emilia Solomon, second from left, is one of 37 top students from around the world receiving the inaugural Lester B. Pearson International Scholarship, which covers tuition, books, incidental fees and residence costs for four years. She is joining Chemical Engineering in Fall 2017. (credit: Johnny Guatto)

Deborah Emilia Solomon (Year 1 ChemE) came home one day to the good news that she had received one of the inaugural Pearson scholarships, a new prestigious and competitive U of T award for undergraduate international students.

“I was overjoyed. I just started crying,” she said. “I was going through so many emotions at that moment because I struggled so much wondering where I would go next.”

This fall, Solomon, a student from India, will join three other recipients of the Lester B. Pearson International Scholarships in first year at U of T Engineering. Named after Canada’s 14th prime minister, Nobel Peace Prize laureate and U of T graduate Lester Bowles Pearson, the scholarship recognizes exceptional academic achievement, creativity, leadership potential and community involvement. It covers tuition, books, incidental fees and residence costs for four years.

U of T President Meric Gertler, members of the Pearson family, Vice-President and Provost Cheryl Regehr and consular officials welcomed four of the Pearson scholars in a special announcement Tuesday, May 30, 2017 at the Lester B. Pearson Garden for Peace and Understanding at Victoria University in the University of Toronto, where Pearson once served as Chancellor.

“In the decade or so leading to the Centennial of Canada’s Confederation, Lester Pearson raised this country’s profile in the international community. Now, as we mark Canada’s sesquicentennial, the scholarships that bear his name will heighten this university’s global reputation as a force for good in every field of human endeavour,” President Gertler said.

“In an increasingly polarized world, in which many countries are turning inward, Canada has renewed its commitment to openness and multilateralism in service of the common good – and Canada’s leading university is committed to doing the same,’ he said. “The Lester B. Pearson International Scholarships will stand as a testament to that commitment.”

John Hannah, a U of T alumnus and grandson of Lester Pearson, said the new Pearson scholars would bring unique perspectives to campus. “I share my grandfather’s conviction that education is a powerful instrument for generating peace and understanding in the world,” he said.

See original story and list of 2017 Pearson scholars at U of T Engineering News.