Skip to Main Content
U of T ENGINEERING
Posted July 25th, 2018 by Office of the Registrar 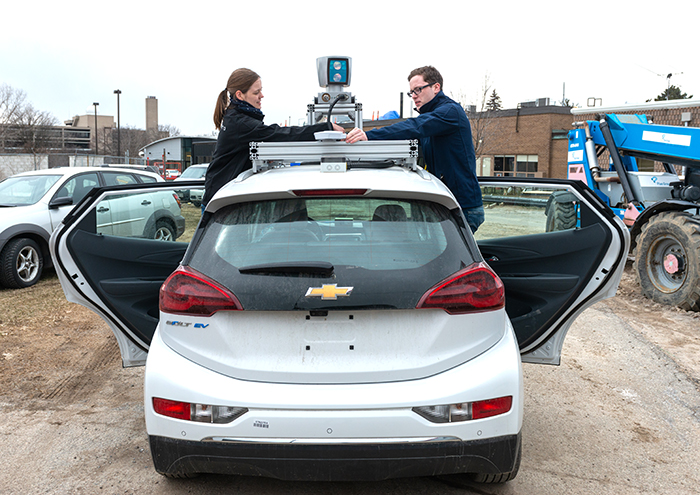 In the future, cars, drones and other robots may not need human pilots — but they will need creative and knowledgeable engineers. Two new programs at U of T Engineering will prepare a new generation of experts to lead the development of artificial intelligence, machine learning and ‘big data’ and transform not only autonomous transportation, but many other fields as well.

The Engineering Science major in Machine Intelligence is the first undergraduate engineering program in Canada to specialize in the study, development and application of algorithms that help systems learn from data. Such systems are already widespread — they power voice-activated assistants such as Siri and Alexa — and are expanding into sectors such as manufacturing, health care and finance. More than 40 students have enrolled in the program, which launches September 2018.

“The demand for graduates in this area has already outpaced supply,” says Professor Deepa Kundur (ECE), chair of the Faculty’s Engineering Science program. “U of T Engineering has long been an international leader in machine intelligence, making this the perfect place to launch this pioneering program.”

U of T Engineering researchers and students have created a robotic retrofit for self-driving wheelchairs and autonomous drones that could one day perform environmental monitoring or deliver automated external defibrillators (AEDs). They have launched spinoff companies such as Deep Genomics, which uses AI to seek out the genetic roots of complex medical conditions, and ModiFace, whose facial recognition and augmented reality algorithms were recently acquired by L’Oréal.

U of T is also home to the Vector Institute for Artificial Intelligence, whose chief scientific advisor is computer science Professor Geoff Hinton, regarded as the ‘godfather’ of the artificial intelligence technique known as deep learning. Both Vector and U of T Engineering’s Institute for Robotics and Mechatronics (IRM) bring together top minds in a diverse set of areas both inside and outside engineering, including neural networks, socially assistive robotics, computer vision and natural language processing.

“Machine Intelligence is the innovator’s most powerful toolbox: it’s a set of techniques that yield valuable new insights and perspectives about almost any kind of real-world problem,” says Robert Adragna, an Engineering Science student who will be one of the first to enrol in the new program as he begins his third year of study in September. “I am confident that the skills I learn by pursuing the machine intelligence option will enable me to change the world.”

Adragna is deputy director of marketing and outreach for aUToronto, U of T’s entry into an international competition that challenges students to turn an electric vehicle into a self-driving one. In April the team’s vehicle, dubbed Zeus, took the top spot in the first of the competition’s three annual meets.

A second academic program, the Master of Engineering in Analytics, launched in January 2018 and is open to professional-stream graduate students. Students in this program will learn techniques and strategies to translate large data sets into useful insights. This could lead to smarter cities, more efficient delivery of health care and improved logistics for advanced manufacturing.

The Myhal Centre for Engineering Innovation & Entrepreneurship, which officially opened earlier this year, will further catalyze innovation in artificial intelligence and machine learning. It provides a new home for IRM as well as prototyping facilities and dedicated space to facilitate between students, faculty, alumni, industry partners and business mentors.

“For more than a decade we have been known for launching new forward-looking programs,” says Cristina Amon, dean of the Faculty of Applied Science & Engineering. “We introduced new undergraduate majors in Energy Systems Engineering in 2008, Engineering Mathematics, Statistics & Finance in 2010, Robotics Engineering in 2015, and now Machine Intelligence in 2018. Through these pioneering educational programs, we are preparing new generations of global engineering leaders who will envision entirely new technologies and anticipate our future challenges.”

The Division of Engineering Science is also hosting an event for alumni called Return & Learn: Alumni Machine Intelligence (MI) Bootcamp on Saturday, Sept. 22, 2018. The sessions feature programming tutorials and keynotes designed to help alumni get up to speed with the latest developments in the field.

“The Engineering Science program has a long history of offering a dynamic curriculum, reflective of cutting edge academic and industry research,” says Kundur. “Our newest program pairs a strong, first-principles approach with the flexibility to encompass the many varied and complex applications of artificial intelligence, analytics and machine learning. It’s truly a winning combination.”

Article by Tyler Irving. Originally published at U of T Engineering.