Skip to Main Content
U of T ENGINEERING
Posted April 20th, 2020 by Office of the Registrar 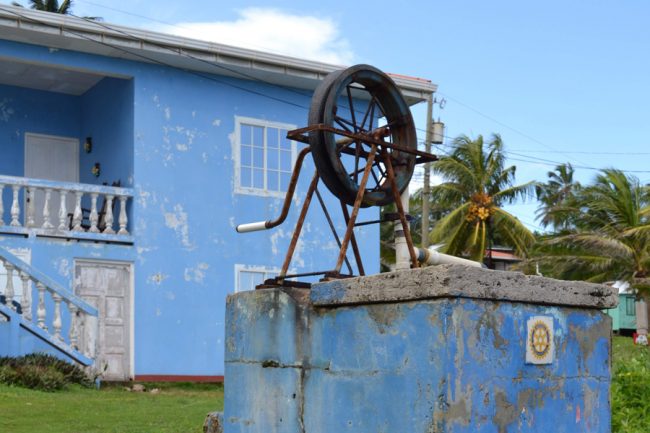 A freshwater well on Corn Island, Nicaragua. As part of their fourth-year capstone design project, a team of U of T Engineering students is designing a system to protect a freshwater spring elsewhere on the island from the incursion of salt water. (Photo: Monica Pramanick)

Tobi Sogbesan (Year 4 MechE) had been in Nicaragua for three days when he finally realized what was at stake with his latest engineering project.

“We had the chance to sit down with some of the oldest women on the island,” says Sogbesan. “The conversations were so informative and interesting. I came to understand why the spring water was so significant to the people, and why it needed to be preserved.”

The island is Big Corn Island, which along with Little Corn Island supports a population of about 7,400 people. For hundreds of years, the freshwater spring has been used to supply water for cooking, cleaning, bathing and drinking. It was also a key place for members of the community, especially women, to socialize, trade and strengthen their community.

But the spring is located near the coast, and in recent years, residents have noticed that during high tide, ocean water comes in contact with the spring’s freshwater. Although freshwater can still be obtained from other sites, the spring’s historical and cultural significance are high, so the community began to look for a way to preserve it.

Several partners came together to help with the project including Seeds of Learning, Students Offering Support, and the University of Toronto’s Centre for Global Engineering (CGEN). The project became part of a fourth-year capstone course for engineering students, which is where Sogbesan and his teammates, Monica Pramanick (Year 4 MechE) and Milan Crnjanski (Year 4 MechE) got involved.

“Never in a million years did I think I would actually get the opportunity to travel to the island!” says Sogbesan.

Over the course of eight days in November of 2019, Sogbesan and Pramanick visited Big Corn Island to learn more about the local community, while also doing the groundwork that would inform their design.

“Our days usually began with taking soil and water samples, touring similar water projects elsewhere on the island, or learning about the availability of construction materials,” says Pramanick. “In the evenings, we were able to play with the neighbourhood kids, learn about the island’s history and visit nearby beaches, fruit stalls, and more.”

With an improved understanding of the social impact of their work, Sogbesan and Pramanick set about designing a physical barrier made from locally available volcanic rock that would protect the spring from the incursion of salt water. They also designed a pumping system that can be used to remove the any contaminated water from the spring before taking the clean water for personal use.

“Since our trip, we’ve narrowed down the geometry/structure of the barrier, construction materials and processes, and conducted more detailed studies on the human factors and cost analyses,” says Pramanick “We are also developing a prototype to be exhibited at the design fair at the end of the semester.”

Pramanick and Sogbesan say that the experience has had a lasting effect on them. In part, this was because of the way they were able to put their technical skills to work to address a practical challenge. But the opportunity to meet and understand the people that would benefit counted for even more.

“My experience at Corn Island was so good that I plan on going back again after I graduate,” says Sogbesan. “It is an experience I will never forget, one that will stick with me for life.  I would advise students who have this opportunity to grab it with both hands.”

Article by Tyler Irving first posted at U of T Engineering News on April 20, 2020.