Posted September 27th, 2016 by Office of the Registrar 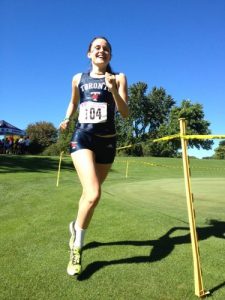 U of T soccer defender Lukas MacNaughton and rookie runner Lucia Stafford (Year 1 TrackOne) were named the Varsity Blues male and female athletes of the week for the period ending September 25.

“Stafford wins!” is not an uncommon phrase in the world of Varsity Blues athletics, but this time it was 2016 Olympian Gabriela Stafford‘s sister, Lucia, doing the winning.

In her first-ever race as a Varsity Blue, rookie standout Lucia Stafford won the Western International cross country invitational in a time of 17:04.5, finishing almost a full five seconds ahead of Guelph’s Katelyn Ayers.