Posted December 9th, 2019 by Office of the Registrar 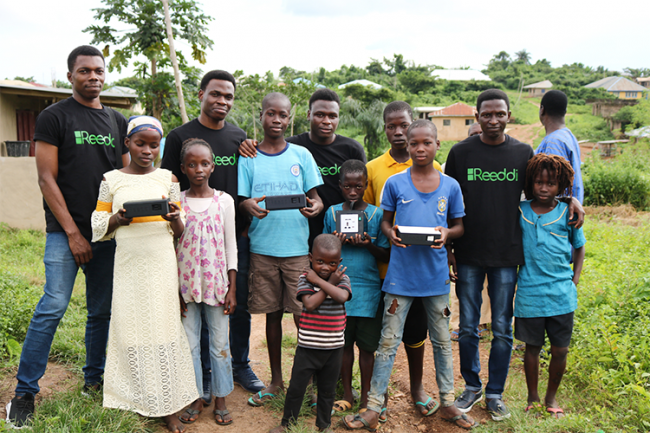 Olugbenga Olubanjo (back row, second from left) poses for a photo with members of the Reeddi team, local community members and his startup’s power-providing capsules during an August pilot project in Ayegun, Nigeria (photo courtesy of Olugbenga Olubanjo).

He was often frustrated speaking to family and friends in his native Nigeria over the phone only to have the calls cut short by power outages back home. So he decided to do something about it.

Barely two years later, Olubanjo is set to graduate with a master’s degree and a job that he created: CEO of Reeddi, the startup he founded and incubated at U of T to bring clean and affordable electricity to energy-starved communities in Nigeria and beyond.

“Energy shortages affect a lot of people I know, love and care about,” he says.

Reeddi provides portable energy via compact capsules that are charged at solar-powered stations located in communities. Customers rent the capsules at an affordable price and are incentivized to return them on time by earning credits that can go toward future rentals.

The concept went through several iterations before arriving at a promising formula.

Initially, Olubanjo envisioned using umbrellas fitted with solar panels to help people charge mobile phones and other devices. The project, then called Veco, placed second in the U of T chapter of the Hult Prize for social entrepreneurship.

The project took a slightly different direction after Olubanjo and his partners approached the Entrepreneurship Hatchery in September 2018.

“We got a lot of feedback from the judges and directors at the Hatchery, and the questions they asked changed the way I saw our business model,” he says.

“We started doing more research and eventually developed the model for the capsules. So the idea really kicked off in the Hatchery.”

Olubanjo says Reeddi benefited immensely from the insights of mentor and adviser Professor Yu-Ling Cheng (ChemE). Professor Jonathan Rose (ECE) also played a key role. “He introduced us to people and exposed us to a valuable network that we’re still benefiting from today.”

Olubanjo adds that the material support provided by the Hatchery was crucial.

“We used the Hatchery’s 3D printer a lot. We were printing models every week, tweaking them and printing more,” he said. “Imagine if we had to pay for all that 3D printing. Wow, it would’ve cost a lot of money.”

Within three months of approaching the Hatchery, Reeddi had its first working prototype.

In August, the company ran a successful micro-scale pilot project in Nigeria with five prototypes to validate its business model and technology.

The positive reception to the pilot left Olubanjo more determined than ever to develop the Reeddi concept.

“People were so excited. There were smiles on their faces and they kept asking us when we would be coming back,” he says. “I thought to myself, ‘I owe it to them.’ I’ve gotten a lot of help in life and the least I can do is give back in my own way.”

Olubanjo says the idea of helping and giving back has always been central to his entrepreneurial outlook.

“At the end of the day, it’s not only about making money. Anyone can make money, but it’s about the happiness that you give people,” he says. “Just knowing that my innovation could have a positive impact on people’s lives — oh my God, there’s no feeling like that in life.”

It’s an impact that could be felt well beyond Nigeria one day, with Olubanjo saying Reeddi has attracted interest from organizations and communities in countries like South Africa, Indonesia, India and the United States.

“Anywhere where there’s an energy or electricity issue is where we come into play. We want to be in as many countries as possible,” Olubanjo says.

Reeddi, which has won numerous clean energy and social entrepreneurship awards, is currently looking to build on its promising start in Nigeria by running a more substantial, three-month pilot project to validate its supply chain model and better understand its customer base. It’s also holding talks with investors in Nigeria.

In addition, the company is launching a new project called Reeddi Crate to manage the distribution of the capsules and is working on refining its software.

Reeddi counts among its team two other members of the U of T community: Osarieme Osakue (CivMin MASc candidate) and Joshua Dzakah (MechE 1T9).

“I’ve gotten a lot of help from the U of T community — from Rotman, Massey College, the Hatchery — it’s been amazing,” Olubanjo says.

Now well on his way, Olubanjo has a few words of advice for other aspiring U of T student entrepreneurs.

“Be courageous, be fearless,” he says. “When I started, there were many distractions and people being negative and discouraging. But I thought to myself, ‘You know what, I know what I’m going to do and I have to just do it.’

“I think being fearless is very important when it comes to entrepreneurship.”

Article originally published at U of T Engineering News. By Rahul Kalvapalle. October 30, 2019.