Skip to Main Content
U of T ENGINEERING
Posted August 14th, 2018 by Office of the Registrar 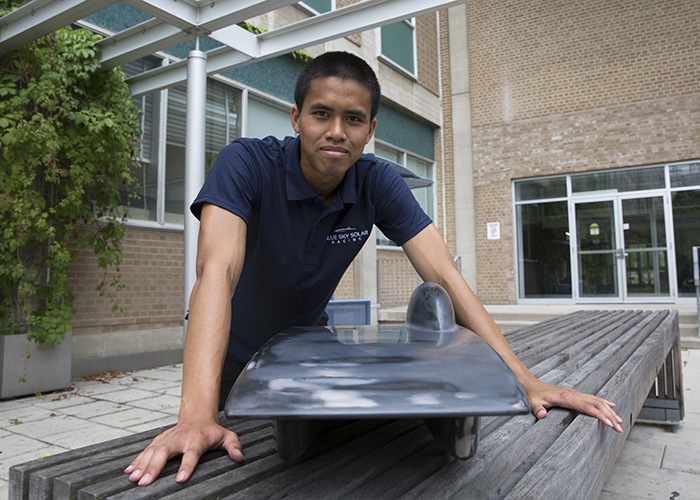 The Blue Sky Solar Racing team is a year away from unveiling their newest vehicle — and they’re not leaving any aspect of its design to chance.

In July 2018 the team conducted wind-tunnel tests of 3D-printed models of two retired vehicle designs, Horizon and Polaris, in the lab of U of T Engineering Professor Philippe Lavoie(UTIAS).

“It was the first time I’d been contacted by the Blue Sky Solar Racing team,” said Lavoie. “They asked if they could spend the weekend at my lab, testing aerodynamic forces on different car configurations. My grad students and I were happy to accommodate and support the student club and their work.”

Patience and attention to detail are key themes during this build year, says the team’s aerodynamic lead, Khanin Thongmongkol (Year 4 EngSci): the team spent a month creating the 3D models.

Thongmongkol led the testing, which involved measuring and comparing the wind-flow characteristics around the bodies of the two car models. The results from the wind tunnel tests will inform the team’s design of the 10th generation vehicle, including how to reduce drag and improve wind flow around the car to make it more aerodynamic.

The team has already begun building, and will incorporate the test results into the design process along the way. Though the team is keeping the full results from the wind tunnel tests confidential, Thongmongkol says to look out for a narrower solar car in 2019.

Blue Sky is also keeping their racing goals under wraps for now, but Thongmongkol feels confident the successor to Horizon and Polaris will be the best iteration yet.

The newest vehicle will make its debut at the biggest solar race on the planet, the World Solar Challenge, taking place October 2019 in Australia.

“Seeing the progress of the team right now, we’re very confident we’ll do well on the world stage,” he said. Thongmongkol has been a Blue Sky Solar Racing team member since his first year at U of T Engineering. In his new role as the aerodynamic lead, he’s looking forward to traveling with the team on their international races.

Blue Sky Solar Racing is the only Canadian team out of more than 40 countries to compete at the World Solar Challenge, including groups from the United States, Japan, Germany, the Netherlands and Singapore. The U of T team placed 11th last year, 12th in the 2015 and 8th in 2013.