Skip to Main Content
U of T ENGINEERING
Posted May 1st, 2017 by Office of the Registrar 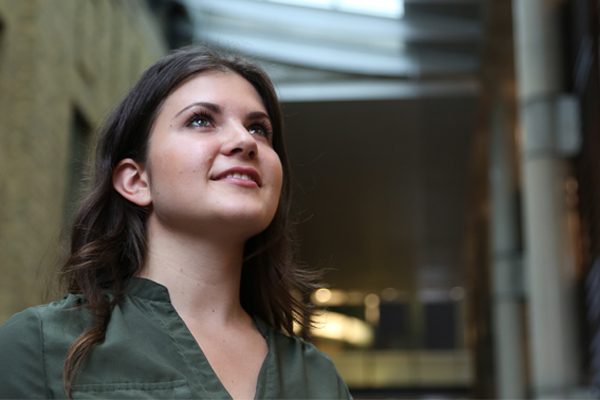 Lassonde Mineral Engineering student Marina Reny (Year 4 MinE) completed two internships with Imperial Oil and will graduate later this year with a job offer from the company to continue working on their Kearl Oil Sands mining operation. (Photo: Kevin Soobrian)

Every morning for a year, in the dead of winter or heat of summer, Marina Reny (Year 4 MinE) rose at 4:30 a.m., before sunrise, and prepared to board the bus that drove her through the boreal forests of northern Alberta on her way to work.

‪“Some mornings I would wake up to the northern lights, or drive past bears and moose on the way to the site. Other days I would pass by flocks of migrating geese or sandhill cranes,” she recalls.

‪‪Reny spent her Professional Experience Year (PEY) 70 kilometres north of Fort McMurray, Alta. on a placement at Imperial Oil’s Kearl Oil Sands project — a location so remote that employees had to be flown in and out for work cycles lasting 10 days at a time. But coming from a relatively small town in B.C., the isolation appealed to Reny — it was part of what attracted her to the field of mining in the first place.

According to a recent report from the Mining Industry Human Resources Council, women make up 17 per cent of workers in the mining industry. At U of T Engineering women represent 27 per cent of current undergraduate enrolment in the Lassonde Mineral Engineering program, up 6 per cent over the previous year.

“After my first year in Engineering Science, I wanted to pursue other options. I did some background research, and I really liked the dynamism and remoteness of mining, as well as its geological aspects,” explains Reny. “Ever since then, I’ve been really happy and I haven’t looked back.”

Over the course of her studies in the program, Reny completed two internships with Imperial Oil, and will be returning to work with them in August after receiving a full-time job offer at the completion of her last placement.

“I was there for 12 months and then I came back again for another four months, so I actually had a chance to establish meaningful relationships,” says Reny. “In a four-month placement, it’s a little bit hard to make those deeper connections.”

During her PEY placement — a 12- to 16-month paid internship that embeds students within companies around the world to gain industry experience — Reny worked with the project’s Mine Operations team. Her position was focused on maximizing operating efficiency, which exposed her to all aspects of a large-scale mining operation.

While on-site, Reny was a regular member of the team and spent her 12-hour shifts speaking with operators, analyzing dispatch data, looking for inefficiencies and communicating her findings back to management.

“A lot of the inefficiencies were human factors, like breaks and shift changes,” she explains. Reny watched how various crews ran their shifts, and the most efficient practices she identified became standards. “Human factors are the ‘low-hanging fruit’ where you can really make gains with relatively minor changes,” she says. Marina Reny stands next to one of the mining haul trucks used at the Kearl Oil Sands mine to transport oil. (Photo: Marina Reny)

After wrapping up her PEY internship, Reny completed one more semester of classes before returning to Imperial Oil for a summer internship. This time, she worked with their project development group in the Calgary head office. “It was such a great experience — having come from the actual mine, I got to see a whole other side of things. I got to see all their projects that they’re exploring for the next 10–20 years.”

At the end of her internship, Reny was offered a full-time position at Imperial’s head office in Calgary. She’ll be joining the Engineering department, where she’ll get to work on broader planning for the mine.

“Working in the mining industry, I realized that there’s actually a lot of opportunity for growth — especially technologically and in terms of sustainability,” Reny says. “I think the next couple of decades will be very interesting and I’m excited to be part of it.”

Original article published at U of T Engineering News. Article by Kevin Soobrian.