Skip to Main Content
U of T ENGINEERING
Posted January 25th, 2019 by Office of the Registrar 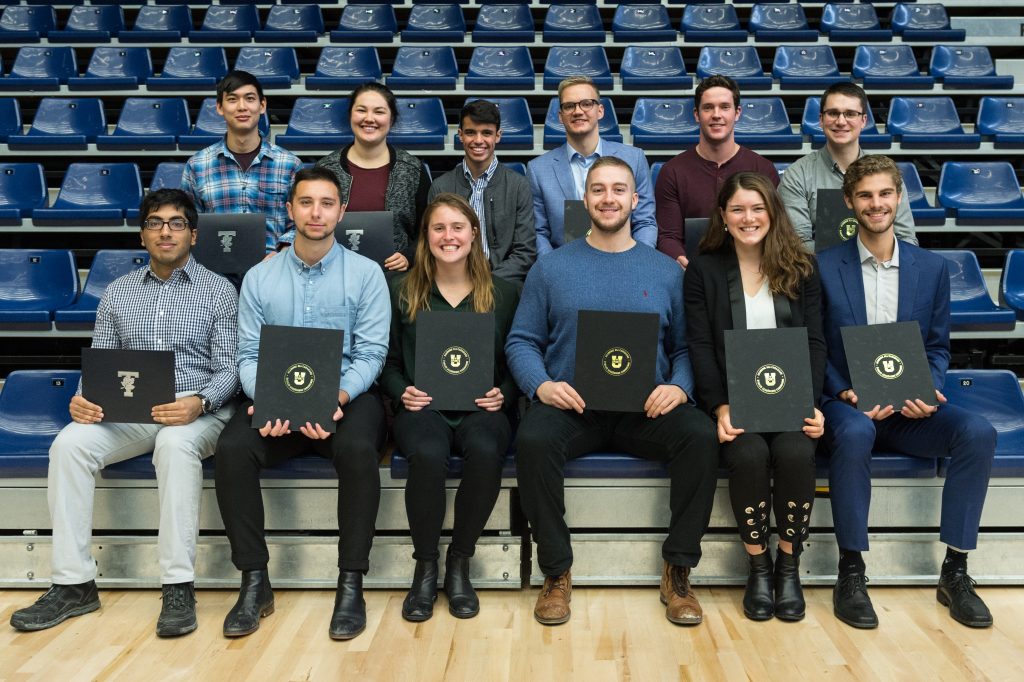 U of T’s Varsity Blues celebrated its top student-athletes from the 2017 – 2018 academic year at the ninth annual Academic Excellence Breakfast, held Jan. 22, 2019, at the Goldring Centre for High Performance.

The event recognizes student-athletes who earned an 80% average or higher in all courses they were enrolled in during the 2017- 2018 academic year, while competing on a varsity team.

Awardees received special pins to mark their achievements – enamel for first-time winners, bronze for second, silver for third, gold for fourth and diamond for students earning the award five or more times during their intercollegiate athletic careers. Yusuf Shalaby (IndE 1T8 + PEY, MIE MASc candidate), a member of the Varsity Blues Men’s Squash team, was among four U of T students who received a diamond pin.

“It’s true, the rigours [of school work and varsity sports] do complement each other – they really make you see the value of time, how little there is, and how you must spend it carefully.”

He also emphasized the networking opportunities varsity sports provides. “I [look] forward to team practices, not just to train, but to talk to other people doing other things and getting perspective. And I think that’s the main takeaway I got from being a varsity athlete: perspective.”

“Receiving an academic excellence award is great,” adds Chen. “It really does feel nice to be recognized for your efforts in all aspects of your life – mind, body and spirit, if you will.”

The 2017-2018* U of T Engineering Varsity Blues Academic Excellence Award recipients include:

*Students’ years of study and/or graduation dates are current as of January 2019.